I kind of can’t get over that I powered myself from Boston to Montreal. Saying it was just me is self-indulgent and, moreso, inaccurate. Even before I left, people I know rallied to help me make plans I’d procrastinated on for too long. IR gave me a route, BK helped me find the first place to stay, and half of the residents of a local warehome helped me pull together all sorts of provisions–from an extra warm sleeping bag to snacks. 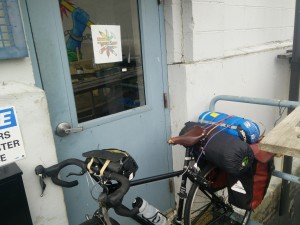 On Day 0, I hitched a ride to Worcester, where the super cool people at the Worcshop let me crash for the night. This really helped–I felt a little bad about “cheating,” but at the same time I didn’t. I highly encourage people taking bike trips to take public transit in and out of cities, because that’s usually the worst part of the trip. I would go as far to say that I have nothing bad to say about the Worcshop, but I ended up (unsurprisingly) staying up too late. So, rather than leaving at 8 or 9, I was out the door closer to 10:30. (This is a theme.)

Day 1 took me across eastern MA to land firmly in the center of the state. There were a few “tricks” to my trip, that I think are important for anyone considering such a thing. A few useful points when considering these:

This relevantly translates to: 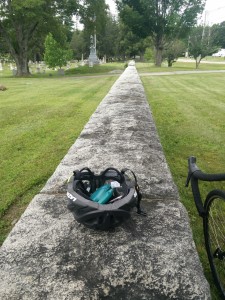 I pretty carefully managed my time. I set the alarm on my phone for every 75 minutes. I’d stop, take a ten minute break, reapply sunblock, have a drink and a (small) snack, check the map, and then keep pedaling. I ended up stopping in a lot of cemeteries, because they occur fairly regularly, have low, wide walls, and aren’t immediately at the side of the road.

When you bike long distances, you should estimate 10 miles/hour. Or at least I do. Between breaks, fatigue, and occasionally revisiting your route during times with a lot of specific directions, it seems to end up that way.

I rolled into Northampton (climbing another hill!) in the afternoon. Total success.

All in all, very good day.