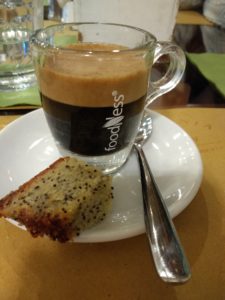 Welcome to what is the first and may or may not be the last monthly summary of my free software activities.

November was a good month for me, heavily laden with travel. Conferences and meetings took me to Seattle, WA (USA) and Milano and Bolzano in Italy. I think of my activities as generally focusing on “my” projects — that is to say, representing my own thoughts and ideas, rather than those of my employer or associated projects.

In addition to using my free time to work on free and open source software and related issues, my day job is at the Free Software Foundation. I included highlights from my past month at the FSF. This feels a little bit like cheating.

Some highlights from my day job

In January I was at Linux Conf Australia and had the idea of forming a group match campaign for the Software Freedom Conservancy. The Conservancy is one of my favorite nonprofits, and I had been interested in trying to level up my giving while not putting myself into dangerous financial straits.

A match campaign is when an organization, a person, or persons offer/s to give a nonprofit a large(er) sum in the event they can raise an equal amount during their fundraising activities. For example, Private Internet Access has pledged $50,000 to the Conservancy as part of the Conservancy’s matching donation efforts.

I wanted to participate in the fun of running a match donation, but recognized that the amount I could offer was paltry in comparison to most matches, as well as being not actually enough to inspire participation from potential donors. I realized that instead I could work with others others to help reach a number — I picked $10,000 somewhat randomly — and began asking around. With the help of Karen Sandler, Conservancy Executive Director, we surpassed that $10,000 and found ourselves with a $15,000 match.

The Conservancy seemed like a natural choice as a recipient of a somewhat scrappy attempt at a match — they consider themselves to be a scrappy organization, doing a lot with very little. They support free and open source software projects — and unless we have good projects, we don’t have anything to offer people looking to be more freedom respecting in their own lives and their works. They do copyleft compliance work, without which copyleft (and licensing in general) would be meaningless — the licenses need to have teeth in order for any companies to actually follow them and the promise of copyleft to be followed through. They work every day to spread the message and value of software freedom around the world, reaching people who need to be made aware of the way their rights extend to digital spaces and technologies. In the spirit of full disclosure, I also consider the staff of the Conservancy to be among my friends, and I enjoy seeing them at conferences.

I’m really excited (these words don’t capture how excited I am) that I get to participate in something so cool and inspiring as a group of people who want to encourage others to give. I hope you’ll consider making our match successful by supporting the Conservancy.